Everyone has that one place they love to go. That place brings them peace and comfort from the tip of each finger to the tip of each toe. You take a deep breath in and zone out. You wake up and here, there, or somewhere. A place that brings you joy and happiness. The air smells fresh. The sky is crystal clear blue. The wave is coming closer to you and then it bends inward and a new wave is born.

The Florida Keys was once know as a convenient area from drug smugglers and illegal immigration. As a result the boarder patrol began a series of roadblocks from the bridge that connects to the mainland. This eventually lead to an economic downfall of the Florida Keys. On April 23, 1982, Mayor Dennis Warlow declared the city independent and renamed it Conch Republic. The city’s succession only lasted a short time and the Keys forever more stayed part of the United States. 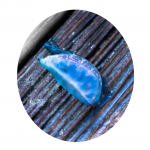 This purply-blue creatures live in the Atlantic and Indo-Pacific Ocean. They have tendrils that extend below the surface. If you come in contact with this little creature, expect an ugly rash and a lot of pain.

Before the Spanish settlers arrived, the Calusa (friendly like war-people) lived on the coast and inner waterways of Florida. The population reached about 50,000 people. Homes were built on stilts and palmetto leaves were woven. Their diets consisted of deer, mullet, pinfish, pigfish, catfish, eels, turtles, shellfish – conchs, crabs, clams, lobsters and oysters. The bones from the animals were turned into spears for hunting. Shells were used for tools, utensils, jewelry, and ornaments for shrines.

The Calooshahatchee River, “River of the Calusa” was the main waterway that the Calusa sailed on to protect their land from the different groups of Europeans that came ashore. The dugout boats were made from hollowed out cypress logs at about 0.3 meters (15 feet) long. The Calusa tribe sailed for long periods of time. They were known to sail to Cuba and the west coast salvaging the wealth from shipwrecks.

By the late 1700’s tribes from Georgia and South Carolina began raiding the Calusa’s territory. Eventually, the Calusa’s were captured and sold as slaves.

The Tequesta were another Native American group to settle in South Florida. They ate the same food as the Calusa tribes and hunted bear, elk, wild boar and small mammals. They hunted shark and used their teeth to carve out logos to make canoes. The Tequesta’s were eventually taken out by the European settlers in the 1500’s.

The hull has become engraved in the water as the waves shrink and grow. Shadows start to lurk as the suns rays glow behind the hunting clouds. A Sailor is tacking alone and his heart is beating to the sound of traffic. This picture was taken at Mallory Square where sunset is celebrated every night with food and entertainment. There is a really cool aquarium and Island juice bar here.

As you drive down to Key West you will notice rail road tracks appear along side of you. These tracks are from the Overseas Rail Road that operated from 1912 – 1935. Most of the Rail Road was destroyed during the 1935 hurricane where more than 650 people died. This 7 square mile town can feel like a tropical oasis. Key West is often thought of a beach town where the wealthy live and the tourists party. Here you will get to pass through Caribbean villas and walk into expensive art galleries and even sit down at some beachy restaurants. Take a selfie at the Southern Most Point of Continental USA and visit the Ernest Hemingway Home & Museum. Make sure to visit the famous Customs House where the 25 foot, 6804 kilograms (15,000 pounds) Sailor and nurse statue sits.

If you stay up at night you may be lucky and see the moonflowers bloom at night. The locals that were born there are proud to be called, Conchs. Key Wests endless sandy coastline and year around sunshine will force you to want to come back the moment you leave.

The Keys are very diverse and are made up of the Florida Straits, a body of water located between the Gulf of Mexico and Atlantic Ocean. All the Islands can be seen by boat but many Islands are not accessible for wildlife protection and research. If you take a boat west from Key West you can stop at Dry Tortugas National Park. This is one of most popular tourist spots to see wildlife and take pictures. The island is 100 square miles long. Here you can visit the 19th century Fort and snorkel in crystal clear water with incredible marine life.

Islamorada was founded May 15, 1513 by the Spanish and used to be known as Los Martires (The Martyrs). Islamorada is 3,900 acres and is 18 linear miles long. Islamorada is only 1 hour South of Miami and is known as the ‘Sport Fishing Capital oft he World’. Besides fishing, this little village is known for  its small laid back town atmosphere, scenic bay and ocean views, local restaurants, beginner scuba diving tours, quaint shops and galleries. If you are looking to get a hands on experience with local animals there is a fun little place called ‘Theater of the Sea‘ where you can interact with live animals like dolphins, sea lions, and sharks and sign up for a cruise that will take you around some private islands. WELL TRAINED DOGS ARE ALLOWED!

Robbies of Islamorada is a well known tourist spot where for a small fee of $4.00 you can feed the tarpons. Along the pier you will find a placed called ‘Charli’s Icee Shack’ where you can get authentic shaved ice cream and key lime pie on a stick. If you are a collector, stop by the ‘Niknax’ store where you can get coins, jewelry, fossils, comics and sculptures made from carved wood and metal. Robbies of Islamorada also offers night fishing tours, jet ski tours, kayaking tours, snorkeling, sunset cruising and parasailing. 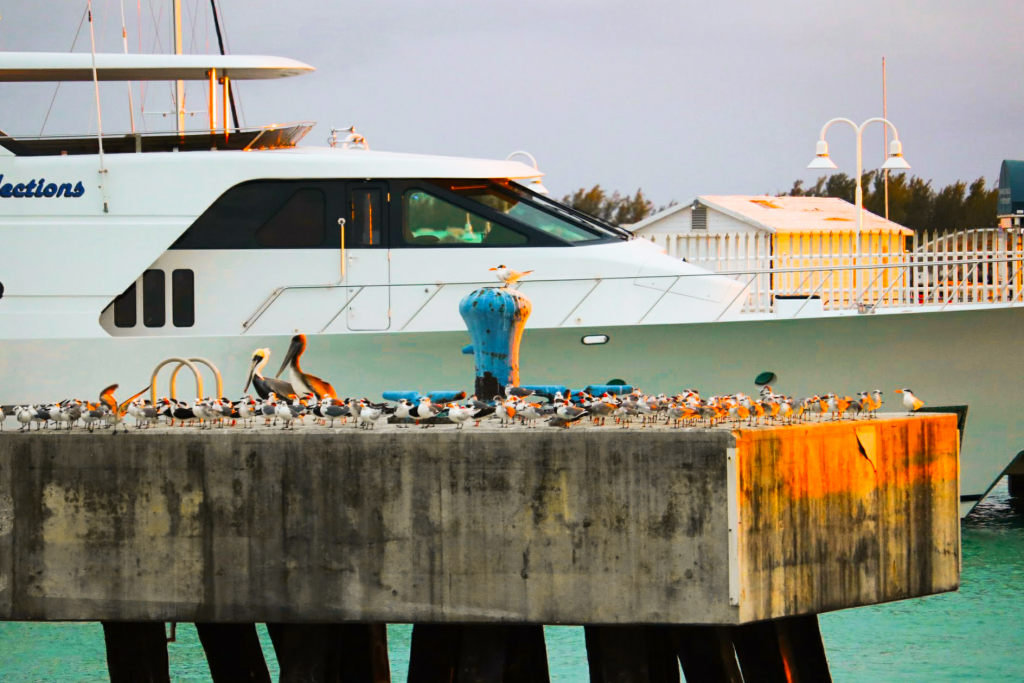 The large bird with the white/yellow neck and head is called a Pelecaniform aka. waterbird and the other large bird sitting to the left of it is known as the Brown Pelican.

The Florida Keys climate is known to be Tropical. July is the hottest month with an average of 28°C (82°F) and January is the coolest month of 16°C (61°F). If you are looking to swim in warm water I would recommend coming in July because the sea temperatures reach 29°C (84°F). The rainy season is from May to July and hurricane season runs from June 1st to November 30th although due to global warming hurricanes have become more unpredictable.

Birds of the Keys

The Florida Keys has over a hundred species of birds. A lot of them live here for the warm weather and seafood.

This map shows you all the best places to stay, eat, shop and entertain.

Jeep Rentals -Zip around on a Jeep Wrangler.

White Gate Court – These cottage style homes are my favorite place to stay on the Keys. There is lots of property, clean cottages and up-kept property, a private beach, great staff, and kayaks. This place is very private and only a few people can stay here at any given time. This place is located in Islamorada. Best of all, dogs are welcome!