Maine’s economic development is dedicated by its geography. For thousands of years Coastal Mainers have used the fine natural harbors for all commerce within Maine and between Maine and the outside world conducted by sea. The seaside communities of Maine rely heavily upon the fishing industry and eventually became home to New England’s biggest lobster fleet.  Maine catches 90% of the world’s lobsters. In 2018, Maine caught 120 million pounds of lobster setting the world record for the 14th year in a row. Their success is due to the strictest lobster regulations on the east coast. Fisherman are allowed up to 800 traps per license and are allowed to catch lobster every day except Sunday. The lobstermen will put out 250 traps twice a week and only go out for 6 months of the year. 20% will go out in the winter time that requires a special type of boat. Only about 20% of what is caught is for keeps. The lobsters that are too small and juvenile will get thrown back in and the ones that are too large are considered top breeders so they too get thrown back in. If a female carrying eggs is caught, they have won the lottery. They get their tales notched and get to live free forever. This is why you will most likely see adult males on your lunch or dinner plate. The cost of lobster in Maine is cheap, about $5-7 per pound.

Before Acadia National Park officially became Acadia, it was named Sieur de Monts National Monument by President Woodrow Wilson in July 1916. Only a few years later in 1919, the park was changed to Lafayette National Park and then in 1929 it was named Acadia. Acadia represented the Acadia people from France which were the first European settlers to arrive in Bar Harbor.

Acadia National Park is about 47,000 acres which is pretty small when to comes to the National Parks. Acadia National Park opened in 1916 with only 19,000 acres. The entire park was privately owned at one point and is now made up of donated land. The park is known for is mass amount of granite. The weather has a significant impact on the water temperatures and currents. The cold temperatures and current of the water are due to the icebergs that melt from Labrador up north. Hurricanes that come up from Florida send in about 20 – 30 foot breaker waves. When the wind is blowing the water will smash against the rocks creating a thunder sound which is how Thunder hole got its name.

There are about 6 million tourists that visit Bar Harbor a year and 5 million of them make their way into Park. The most crowded time to be in the park is from 4th of July weekend to the 3rd week of August. You must reserve your hotels months in advance.

The park is known for its variety of small wildlife. The park is home to over 200 species of birds lead by bald eagle and peregrine falcons. If you get a chance to visit Bear Brook Pond, you will see the two biggest beaver lodges in the park. The beavers are allowed to control the water levels in that pond. There is also a good chance to spot deer, coyote and beavers while hiking through the woods.

The  Jackson laboratory is known to produce the largest producer of medical mice. They employee over 2,500 people and produced over 3.4 million mice in 2018 and exported them to 8,500 labs around the world. 400 scientist from all over the world come to over see this specific genetic breeding. Most of the mice are used for cancer research.

In 1949, the lab burned to the ground. This lead to the returning of mice in order to help wit recolonization.

The Bar Harbor Fire occurred in 1949 right when the Guided age ended. The Bar Harbor Fire went down in history as the worst fire in Maine. 2/3 of the island was struck and about 400 homes 200 hundred businesses were burned in bar harbor. The out of control fire lasted from the middle of October to November 7th which is when it ended with a 6 inch snowfall. The fire burned all the way down to the ocean from the northside and southside of bar harbor. The fire was so strong that it trapped over 1,500 people. The town had no choice by to take people off the island by boat. 750 people were taken by boat to the other islands and while this was happening a miracle happened. The wind shifted onto itself before killing the people that were trapped. One of the lumber mills in the park burnt down a total of 4 times which is now a restaurant where you can eat delicious popovers and drink fabulous tea.

While driving through West Street you will see many homes that were built in the late 1800’s and 1900’s. People that owned the homes along the shoreline were fairly wealthy. The homes across the street from West Street were were the Servants lived. When you drive down West Street you will notice that aren’t many brick mansions but on this one street is JP Morgan’s estate built in 1906 that is now owned and donated to the Sea Coastal Mission.

The Sea Costal Mission has a boat called the Sunbeam. There are about 40 islands off the coast of Maine with  Sea Coast Communities. The Sunbeam takes a preacher and physician’s assistant and goes out weekly to provide spiritual and medical services to those that do not have access. 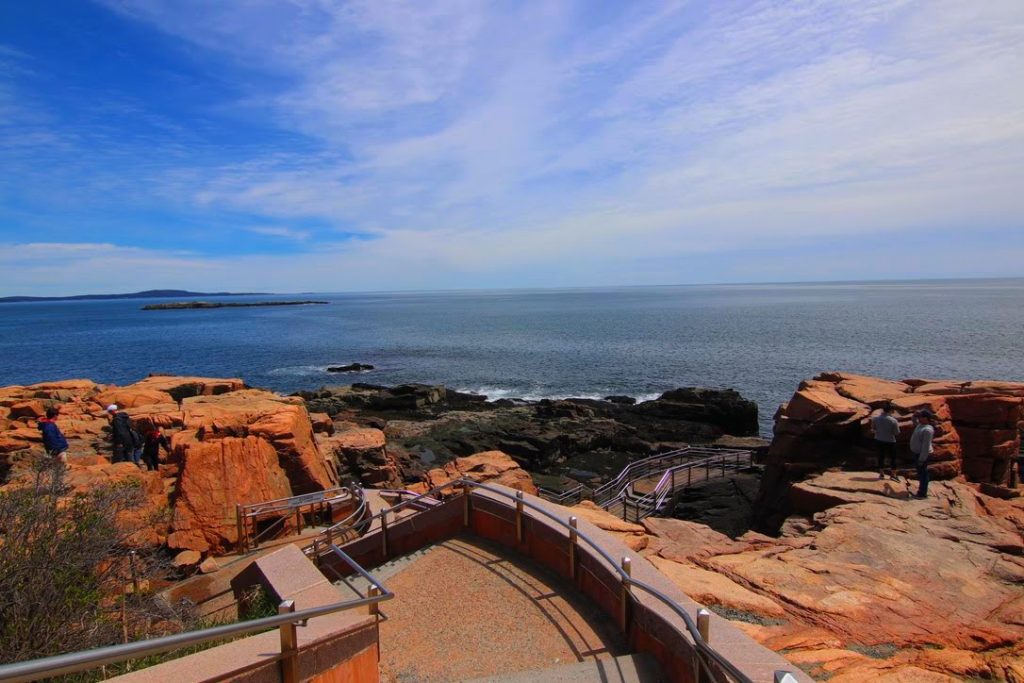 Acadia was once all privately owned land. A lot of the land in Acadia was owned and donated by John D. Rockefeller. He used a lot of his own money to purchase the land because he did no want to see urban sprawl after WWII. He convinced a lot of wealthy land owners to donate land so that in 1960’s he could convince congress to take stewardship of the land.

While you make your way through the park you will see a series of 19 stone bridges. Each of these stone bridges were designed to connect carriage roads and were paid for by the Rockefeller. You will notice each stone bridge looks different. That is because the architect was required to follow one main rule, which was to make sure no two bridges were alike. 95% of the carriage roads never cross the main roads and in total are 50 miles in length. If you go down to Jordan pond, you will see a Rockfall and above the 2 mile shore you will see a line in the rockfall. This is a carriage road that leads to the middle of absolutely nowhere. If you own a horse, the park will let you bring your horse free of charge to walk the trails for the time of your stay. The homes that sit along the carriage roads are made in french stone architectural style. One of the homes has bird houses built into the front of the garage. These homes were for the Homing Pigeons to live in in order to deliver mail before there was electricity.

If you want a true New England experience you will want to stay in cottages, AirB&B’s, cabins, tents, and beach homes. Below is a list of places to stay: